With the Victorian Artists Society closed at present with the COVID-19 restrictions, the online newsletters are continuing to celebrate the outstanding contribution of artists, past and present.

The current newsletters are focusing on the important contribution made by the women artists of the Heidelberg School to our society, and how difficult it was for them to achieve professional recognition and to survive as professional artists.

Each of them played a significant role in the development of the professional standing of women artists in Australia, and each contributed to the greater awareness of the public to the high standard of art that was achievable by women artists. 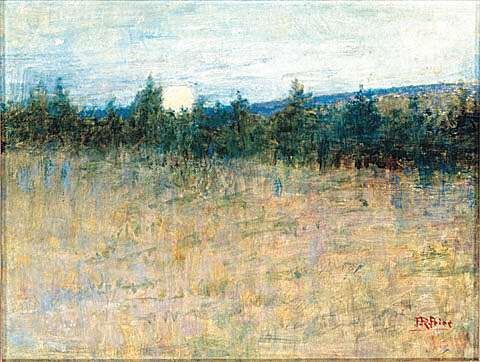 Jane Price is best known for her small moody impressionistic landscapes, many of which depict the rising moon and capture the softness of the evening twilight.

In 1889, she shared a studio in Grosvenor Chambers, Collins Street east, Melbourne, with fellow Heidelberg School artists, Clara Southern and Jane Sutherland. She was also a close friend of Tom Roberts and Frederick McCubbin.

Around the time of the First World War, and for several years after, she rented a ‘log cabin’ in Diamond Creek, and this was situated close to ‘The Shack’, the studio and home, of May Vale. 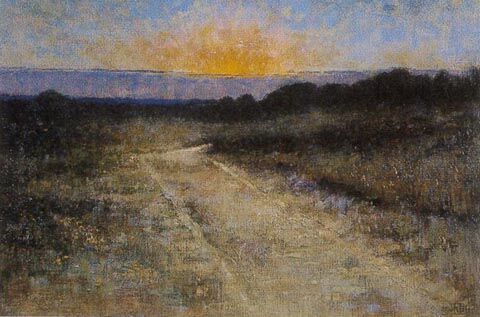 This plein air work was painted around the same time as her work 'Moonrise', and is very much a companion work, which like 'Moonrise' captures the mood of the scene, and the first rays of light on the landscape.

The work was offered for sale through Sotheby's. Fine Australian and European Paintings. April 1998, Catalogue no.146. 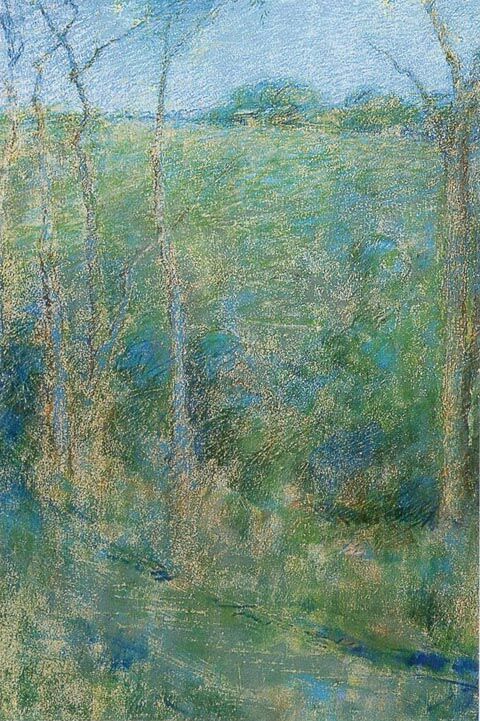 It is known that Jane Price regularly visited and painted plein air with the Heidelberg School artists at Eaglemont and Heidelberg, and it is also known that she produced a number of these pastel works that captured the colours of the 'seasons'.

In this work, the soft blues and greens are very much in keeping with the same palette that she chooses to depict spring, in her work 'Spring Clouds', c.1905. In 'Heidelberg', she also uses the heightened horizon line, as she does in her work 'Spring Clouds', c. 1905. Many of the other Heidelberg School artists also produced pastel works, including Jane Sutherland, Tom Roberts and Frederick McCubbin.

The work was offered for sale through Sotheby's. Fine Australian and European Paintings. April 1998, Catalogue no.179. 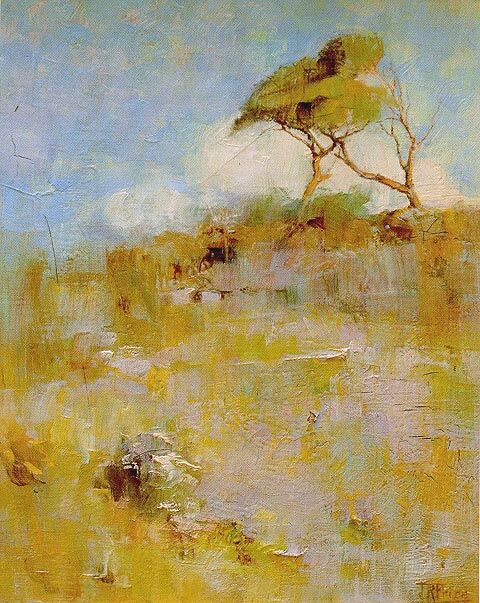 Exhibited in the 'Private Exhibition of Pictures', held in the McCubbin home in Shipley Street, South Yarra, in November 1905, this work shows the artist's sensitivity to her subject, and is a good example of her interest in the 'Naturalists' and their use of the heightened horizon line in their works. The work is painted very much in the style and technique of Walter Withers, even to the choice of palette.

The exhibition in which it appeared was reviewed in The Age 20 November 1905 by Mary Therese Loureiro, who noted that Jane Price 'shows various landscapes, painted with the sensitive perception that is characteristic of her work'. 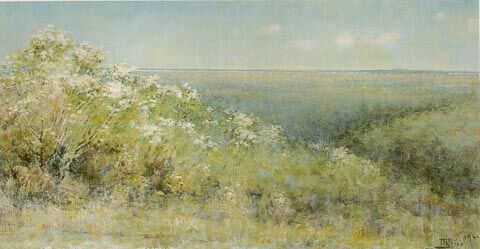 Like Walter Withers, Jane Price was interested in the mood, the light and the colours associated with the seasons. Her works are tranquil, and her palette for her oils, is often that of soft pastel shades. This is a typical example of her later works, where she has used soft blues and greens, and has captured the new blossom on the trees and the warmth, associated with spring. Note once again her use of the distant heightened horizon line, which she used as a device, in many of her works.

The work was offered for sale through Sotheby's. Fine Australian Paintings. April 1990, Catalogue no.128. 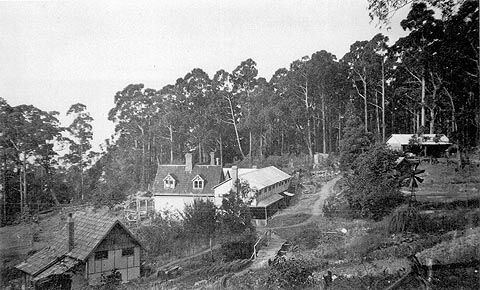 This photograph shows the later chalet-like additions at the rear and laundry on the far left. The bush in the background is where the Frederick McCubbin work 'The Pioneer' was painted. 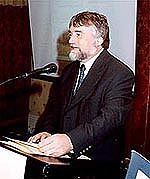 AN INSIGHT INTO THE LIFE OF JANE PRICE AND HER  ART BY LEADING ART HISTORIAN. ANDREW MACKENZIE OAM

"Jane R. Price, painter and governess, and one of six children, was born on 18 February 1860 in Cheddar, England. She was the daughter of Rev. W.T.Price, a Baptist Minister, and this early exposure to religion, may have later sparked her keen interest in theosophy.

She studied at the South Kensington Art School before travelling to Sydney in 1880.

Two years later she settled in Melbourne, and made close life-long friendships with Tom Roberts and Frederick McCubbin and his family, as well as the Colquhoun family, and the women artists of the Heidelberg School, Jane Sutherland and Clara Southern.

From 1888, she shared a studio in Grosvenor Chambers with Clara Southern and Jane Sutherland for several years.

Jane Price was an advocate of painting plein air, and painted with the artists of the Heidelberg School at Eaglemont and Heidelberg. She painted small pastel works, such as her work 'Heidelberg' as well as small 'impressionist' works in oils, reminiscent of the palette of Walter Withers, depicting the subject matter of David Davies.

Like David Davies, she was particularly interested in capturing the spirit or mood of the landscape at different seasons, and in capturing the atmospheric effects of moonlight or early morning sunlight. This interest in light on the landscape can be found in many of her works, with good examples being 'Moonrise', 'Sunrise', and 'Sydney Harbour by Night', c. 1910. Also, in many of her works she used a high horizon line, a device that was associated with the 'Naturalists'.

The Colquhoun's and McCubbin's had been friends for many years, and the children of the two families were very close. In the late 1890's, they had lived only a few doors from one another in Brighton.

On 6 September 1903, Frederick McCubbin wrote to Tom Roberts from 'Fontainebleau', and noted that: 'Miss Price is sending you a letter, so, I enclose this note with hers'. McCubbin, further notes in a letter to Roberts, of November 1903, from 'Fontainebleau', that the McCubbin household were all looking forward to seeing Louis Abrahams on his Motor Parade to Woodend the next Sunday, and that: 'We must get up an oration for them; Miss Price, Mrs Mc. and all the kids and a packet of crackers'.

Roberts in his letters to McCubbin often asked after Jane Price, and refers to 'Farmer' Price, which I would suggest was his nickname for Jane.

The letters would indicate that Jane Price remained the governess to McCubbin's children for several years, during which time she also continued with her painting.

In November 1905, she exhibited in the 'Private Exhibition of Pictures' managed by Annie McCubbin in the McCubbin home in Shipley Street, South Yarra. The exhibition, which included works by her fellow artists, Jane Sutherland, Clara Southern and May Vale, was well attended and resulted in a number of sales.

McCubbin refers to this exhibition in his letter to Tom Roberts of 8 January 1906, and notes: 'We had a little exhibition at Shipley Street, South Yarra our present address; lots of people and a few small sales. Janey Price did very well I am glad to say - Mrs Mc's idea.'

One of the works she exhibited in this exhibition was 'Spring Clouds', c. 1905. She regularly exhibited her works in Melbourne from 1882, and exhibited with the Victorian Artists' Society from its inception in 1888 to 1906.

In 1907, she moved to Sydney. Here in 1910, she became one of the foundation members of the Society of Women Painters, and painted a number of Sydney Harbour views, including 'Sydney Harbour by Night', c. 1910, which was purchased by the National Gallery of Victoria in 1954.

Around the time of the First World War, Jane Price returned to Melbourne and settled in Diamond Creek, where she rented a 'log cabin' close to the studio and home of May Vale. She continued with her small landscapes in oils of the local area, as well as works depicting Australian flora. Several of these, depicting Waratahs, and various gum blossom works, were later commercially reproduced as post cards.

We do know that Jane Price in her later years painted in Kallista, and one of her delightful, soft landscapes is 'Springtime, Looking from Kallista Heights', painted in 1940.

It is recorded that in 1938, she moved to 'Rosedale' in St. Kilda, the home of her close friend, fellow artist and fellow theosophist, Ina Gregory. Ina Gregory was the model in the extreme right of the work 'Art Students', 1895 by Emanuel Phillips Fox.

Like many of her friends, such as Ina Gregory and Beatrice Colquhoun, Jane Price took a keen interest in theosophy, and this was heightened after the visit of Annie Besant to Melbourne in the winter of 1908. Annie Besant was on a lecture tour of the cities of the Australian Commonwealth. A book of these lectures was published by G.Robertson in Sydney, later that year, and was titled Australian Lectures, 1908.

Jane Price became a founding member of the Melbourne Branch of the Theosophical Society, and Bessie Colquhoun, daughter of Beatrice, remembered her mother and Annie McCubbin, deep in discussion over theosophy and the writings of Annie Besant. It is interesting to note that Besant Hall was used by a number of the artists, including May Vale, as a venue for exhibitions.

The role of theosophy in Australian art has yet to be fully examined. However, given the number of artists who took an interest in theosophy, especially in the early years of the Twentieth Century, it is likely that theosophy was a factor in the production of a number of their artworks.

What is known is that Jane Price wrote the foreword and a poem for Ada Gregory, for her theosophist inspired novel 'The Clouded Dream'.

In the book by J.Roe, titled 'Beyond Belief: Theosophy in Australia 1879-1939' published by University of New South Wales Press, Sydney, 1986, there is recorded this quote by Jane Price: 'Art is a matter of life and death for the building of a nation. Australia cannot do without it.'

Jane Price continued with her art, up until her death at 'Rosedale' in 1948, at the age of eighty-eight."

2023
THE VAS BUILDING IN HISTORY

2023
VAS Paint Out at McClelland Sculpture Park and Gallery

2022
THE ROMANTIC AND THE IDYLL
More News