A Retrospective Exhibition of work by Judith Perrey, ﻿a former Fellow of the Victorian Artists Society. 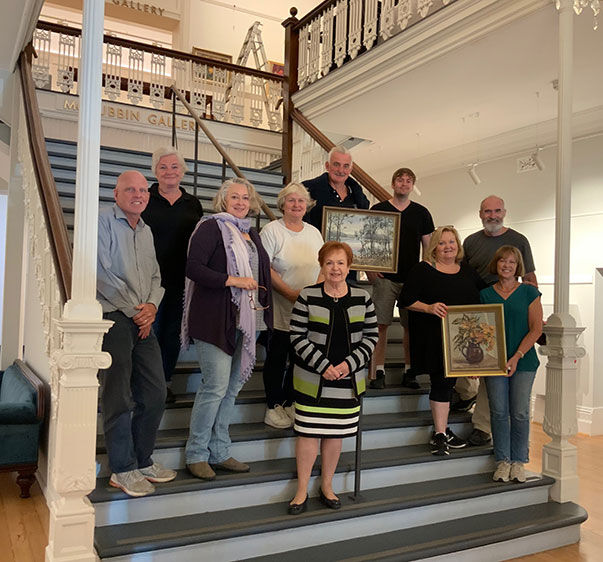 Judith Perrey's children and supporters, who helped to set up the Retrospective Exhibition, with Victorian Artists Society President, Eileen Mackley AM (front centre) on the Society's historic staircase.

Jenny McAllister and Peter Setford, the children of Artist Judith Perrey, are interviewed by Ron Smith from the Victorian Artists Society, about her life and artworks. 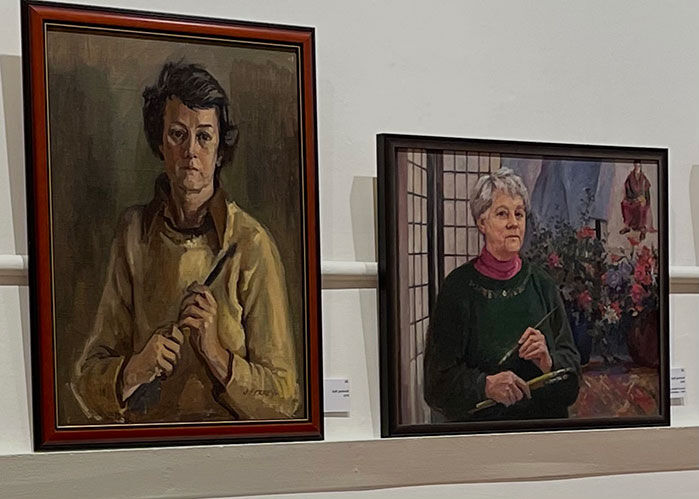 Judith Perrey’s name is unfamiliar to art professionals, especially outside of Melbourne. Yet her life story raises central unresolved questions about gender, class, celebrity and reputation in Australian art, particularly in relation to the poorly documented story of the relative invisibility of professional women artists across 1945-1975 in standard Australian art historical overviews. She was regarded by both Sir William Dargie and Charles Wheeler as one of the most naturally gifted students who ever enrolled in the National Gallery School, equal to such legendary figures as Hugh Ramsay and Constance Stokes. More-over she was younger than either of them, being in her mid-teens and already highly competent when she joined the gallery school.

Judith was a crucial witness to a highly symbolic shift in the emergence of contemporary art as the key public cultural expression in Melbourne: the controversy over the 1947 National Gallery of Victoria travelling scholarship competition. Whilst traditionally discussed by curators and historians as a positive sign of the growing acceptance of contemporary art, overlooked evidence, both published and in manuscript, states that gender also determined the selection of the prize winner as much as radical style. A male ex-serviceman was seen, both in the press and amongst the judges, to be the more likely artist to create international success on behalf of Australia than a 19 year-old 'girl' (as then described in the press) no matter how talented.

Neither radical nor conservative Australian women artists found much public traction in the decades between the interwar modernists and the emergence of second wave radical feminist art. Judith came from a working-class family without either social prominence or substantial money to support her, making it even harder to consolidate a career, in the 1940s and 1950s, when such factors were closely associated with curating and public gallery culture in Australia. However, she worked assiduously for a number of years from the mid-1940s to 1951 as a commercial artist as well as trying to place her fine art before the public, exhibiting widely, organising small group shows and being accepted as a finalist in the Archibald Prize.

When she returned to painting full time in the early 1980s, the artworld that she knew had disappeared and her work was mostly seen in charity art competitions across Victoria and interstate and in traditional artists' societies. Notwithstanding this challenge she was notably prolific, organised and disciplined in her work rituals. She managed and documented her practice with a curatorial precision, that was not often matched by other traditional or conservative artists.

As well as paintings, Judith Perrey left a considerable corpus of unpublished writing that includes sharp and perceptive commentaries on social mores and social conditions of the time, as well as reflections on art and creativity. Her writing may be even more insightful about the fate of talented women in Menzies' Australia than her artwork. The depth and extent of her writing is only just being surveyed.

Collections: include Warrnambool Art Gallery, Artbank, University of Melbourne, City of Boorondara and a number of Melbourne secondary colleges.