More than 150 guests—Signatories and Fellows of the Victorian Artists Society, sponsors, donors and council members—were welcomed with champagne to the opening of the Anniversary Celebrations. This is an exciting time for the Victorian Artists Society. 150 years ago some of Australia’s earliest and most notable artists, including Louis Buvelot, JA Panton, Thomas Clark and Hubert de Castella, came together to form an institution, the Victorian Academy of Arts, to promote and champion excellence in painting and the education of these skills. The Victorian Artists Society as we know it today came about from the union of two societies, the Victorian Academy of Arts and the Australian Artists’ Association. While their original bluestone studio was mocked for its morgue like façade, the current four gallery building, completed in 1894, is one of the finest examples of American Romanesque architecture in Australia. Over the years it has undergone many restorative works, the most recent of which was completed in August of 2019 and saw the refurbishment of all galleries, studio and offices, bringing the building up to modern standards and new levels of function and beauty.

Read more about the history of the Victorian Artists Society here.

At 6:20 on the night of the 10th, Her Excellency, the Honourable Linda Dessau AC, Governor of Victoria and Mr Anthony Howard AM QC, were welcomed by VAS President Eileen Mackley AM and the VAS Council, on the historic steps of the Victorian Artists Society. Amidst a jovial atmosphere of greeting old friends and name tag allocations and the very pertinent decision was made that no food or handshaking would take place as the outbreak of the Coronavirus was on the forefront of everyone’s minds. However that did not stop the members from elbow jabbing each other as new found ways to express heart felt hellos.
Corralled by our unflappable office Manager Chris Reade, the councilors proudly organised themselves upon the historic steps of the VAS to have their picture taken with the Hon. Governor and Mr Anthony Howard.

Next on the agenda was a tour of the building, including the original historic art studio and the newly restored galleries. Past treasurer, two-time Artist of the Year Winner and long-time VAS teacher, Julian Bruere welcomed the Governor to his classroom. The Governor was delightfully impressed with the student’s watercolour works. The Governor spoke warmly of the prestigious collection of art held at Government House and extended an invitation to all the students at VAS to visit the collection in the coming months.

The Governor, Mr Howard and Eileen Mackley made their way to the galleries in the new lift where the President Eileen Mackley proceeded to provide a tour of the Contemporary art works hanging in Frater Gallery. The new elevator, known as the Gordon Moffatt Family elevator, was named in honour of Mr Gordon Moffatt AM, a former Treasurer, loyal supporter and generous donor to the Society. The elevator had been a long term goal of the Society and was installed last year together with the restoration of the VAS galleries and foyer. 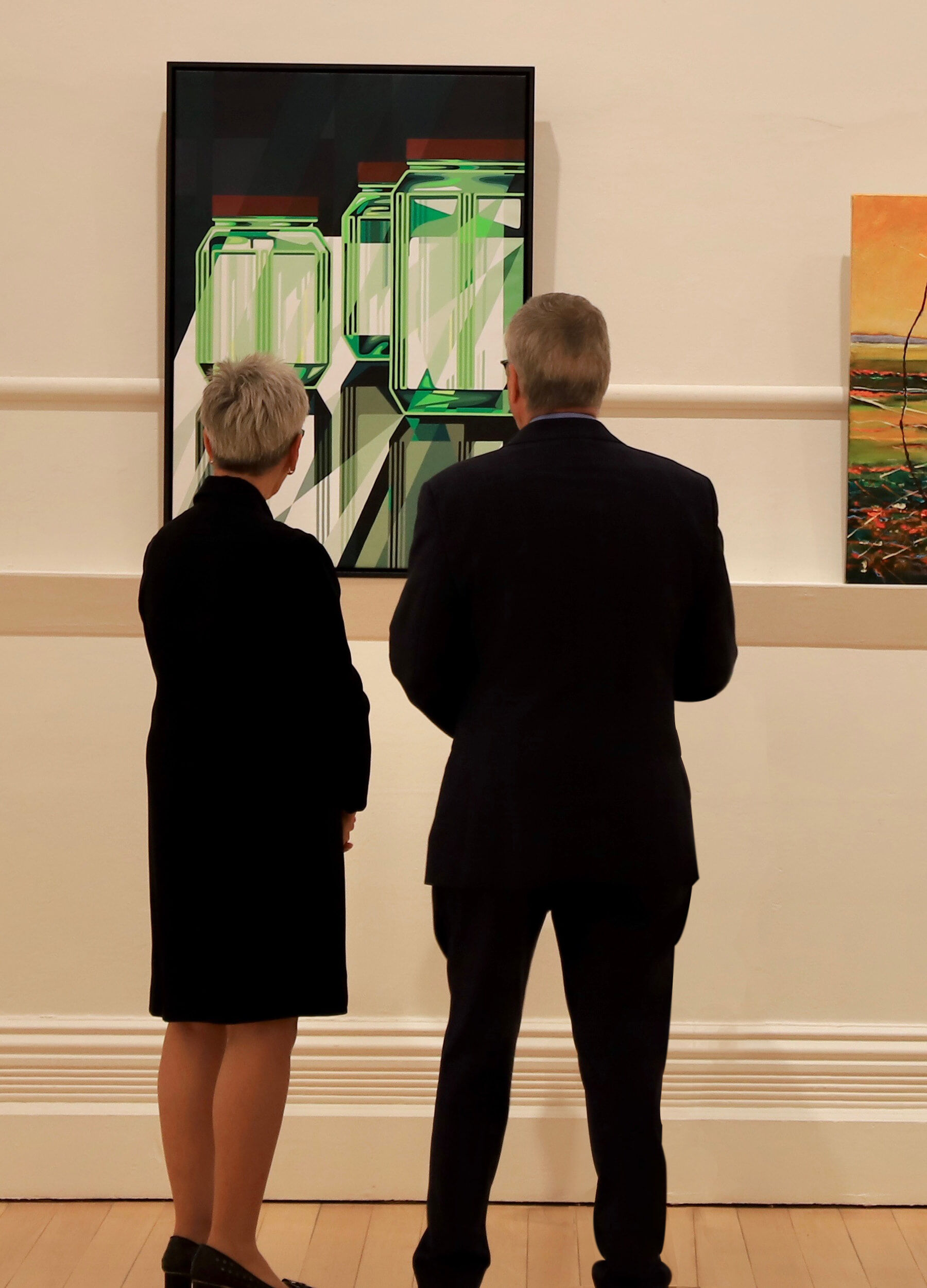 The Governor Linda Desseau and Mr Anthony Howard were very impressed by the quality of paintings on display taking a particular shine to ‘Uranium Glass’ by Heather Towns.

They were also pleasantly amused by ‘Coronavirus’, painted by Fayez Assaf, and commented that the subject matter was truly a contemporary issue.

In the mean-time an audience of 150 plus artists, members, and friends of VAS waited patiently in the Hammond Gallery for the Her Excellency to arrive.

Taking to the stage the honorable Governor was introduced by Andrew Mackenzie.

The Governor presented a wonderful speech, congratulating VAS on the success of the restoration project and putting into perspective the historical significance of the building. The Governor drew parallels between the Governor’s house citing that Domain Hill was an empty block of land when the first bricks were laid for the construction of the VAS building in 1898.

The Governor then went on to present the Victorian Artists Society Fellowship and Signatory Awards as part of the official opening. The Fellowship Awards recognise significant contributions to VAS by individual members, while Signatory Awards are presented to artists who exhibit in VAS Seasonal Exhibitions twelve times or more during a period of five years.

Ray Wilson received his Fellowship Award in recognition of his distinguished service to the Society during his time as VAS Treasurer, VAS Manager, Project Manager of the building project and other major contributions to the VAS art school and exhibitions.

John Hurle’s Fellowship Award recognises his years of service as VAS Council member and convenor of the VAS permanent collection, as well as coordinator of the weekend paint out days.

Robert Senior received a Fellowship Award for his years of membership and contribution to the Society through exhibitions, sponsorship and promotion.

Ron Smith received an Honorary Fellowship Award in recognition of his years of contribution to VAS through his work promoting the Society, through print news media, TV, radio, video productions and email newsletters.

These are artists who have contributed to the art and exhibitions of the Victorian Artists Society through regular participation in Select Exhibitions over many years of membership. 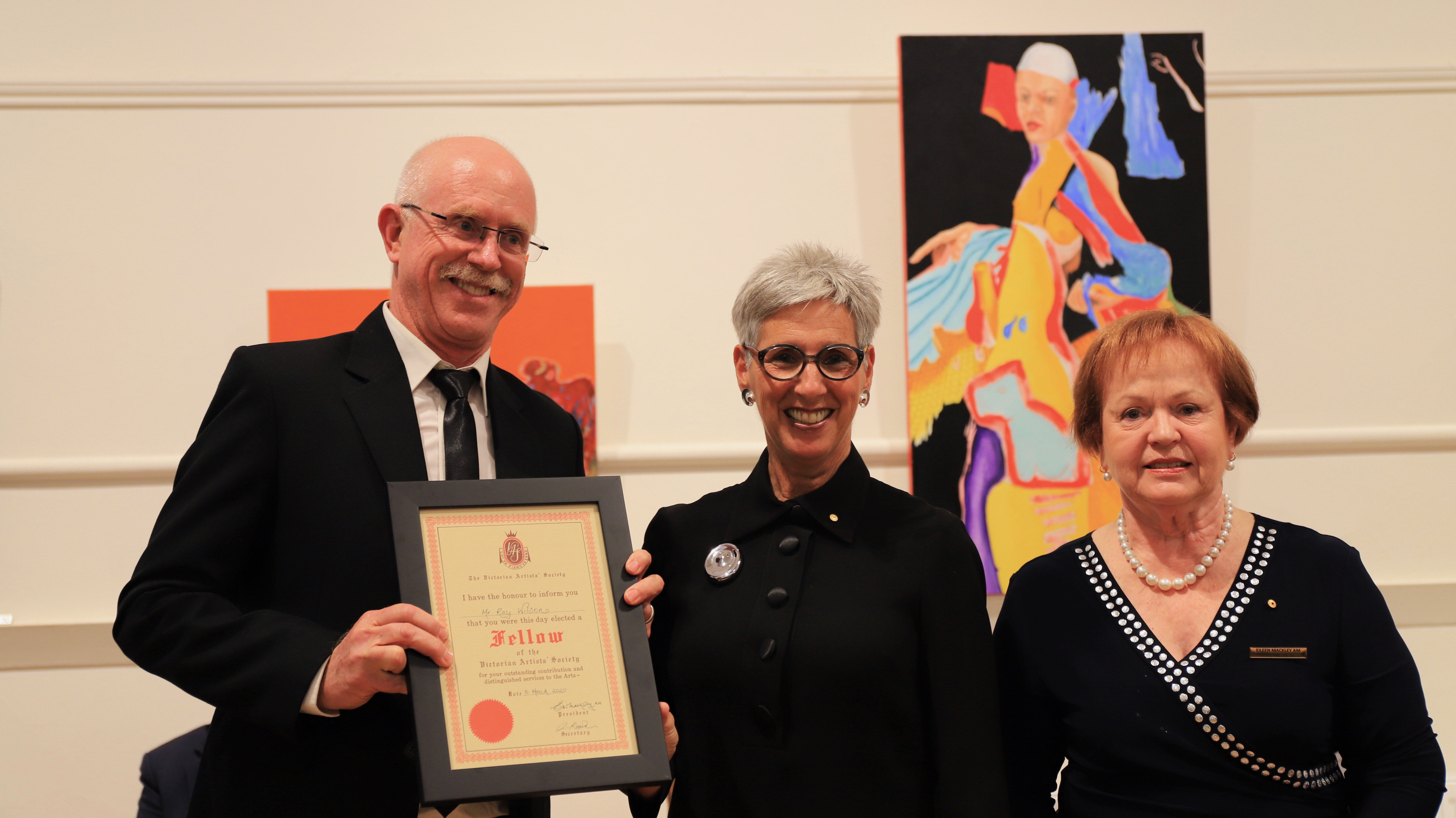 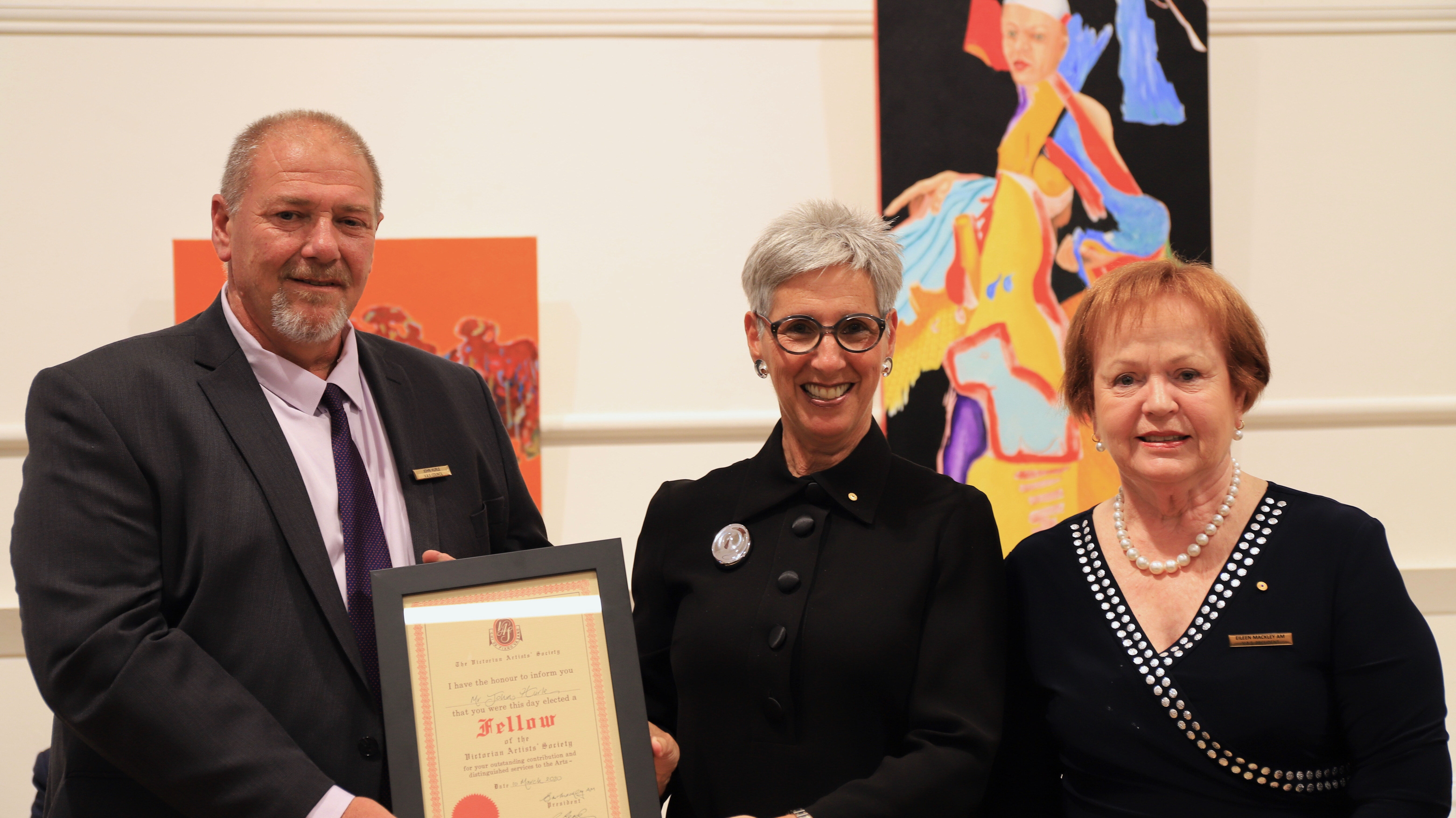 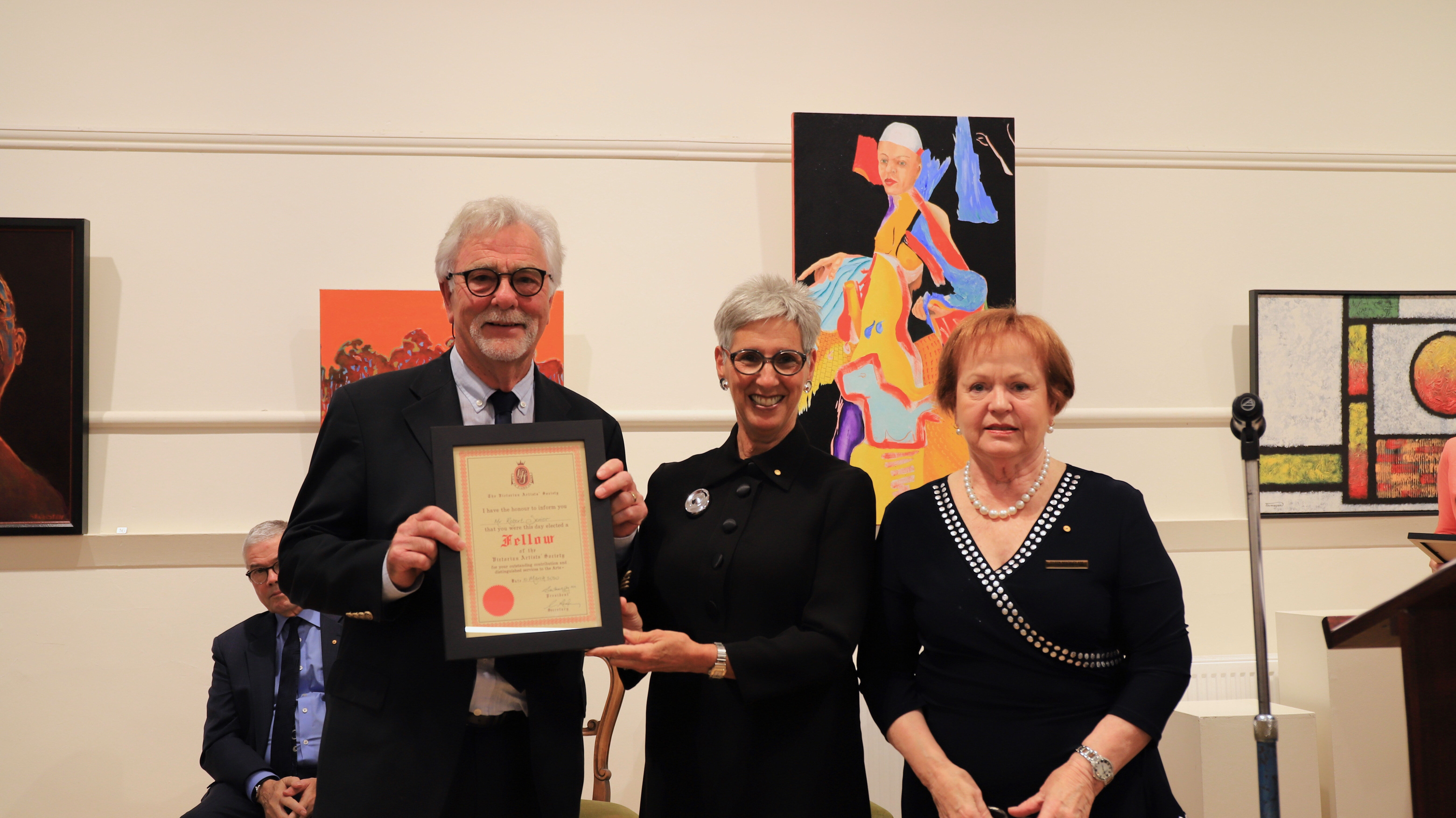 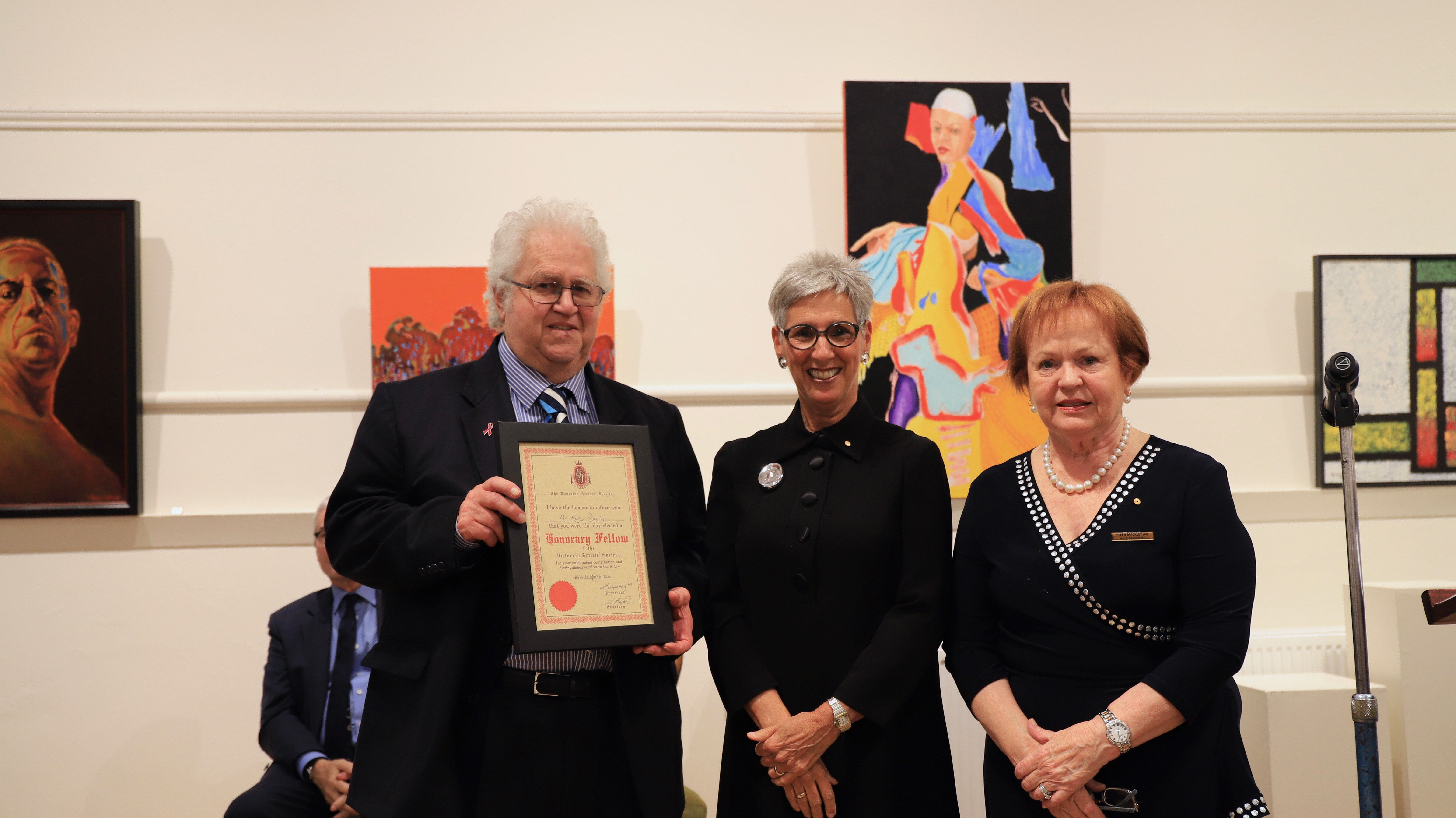 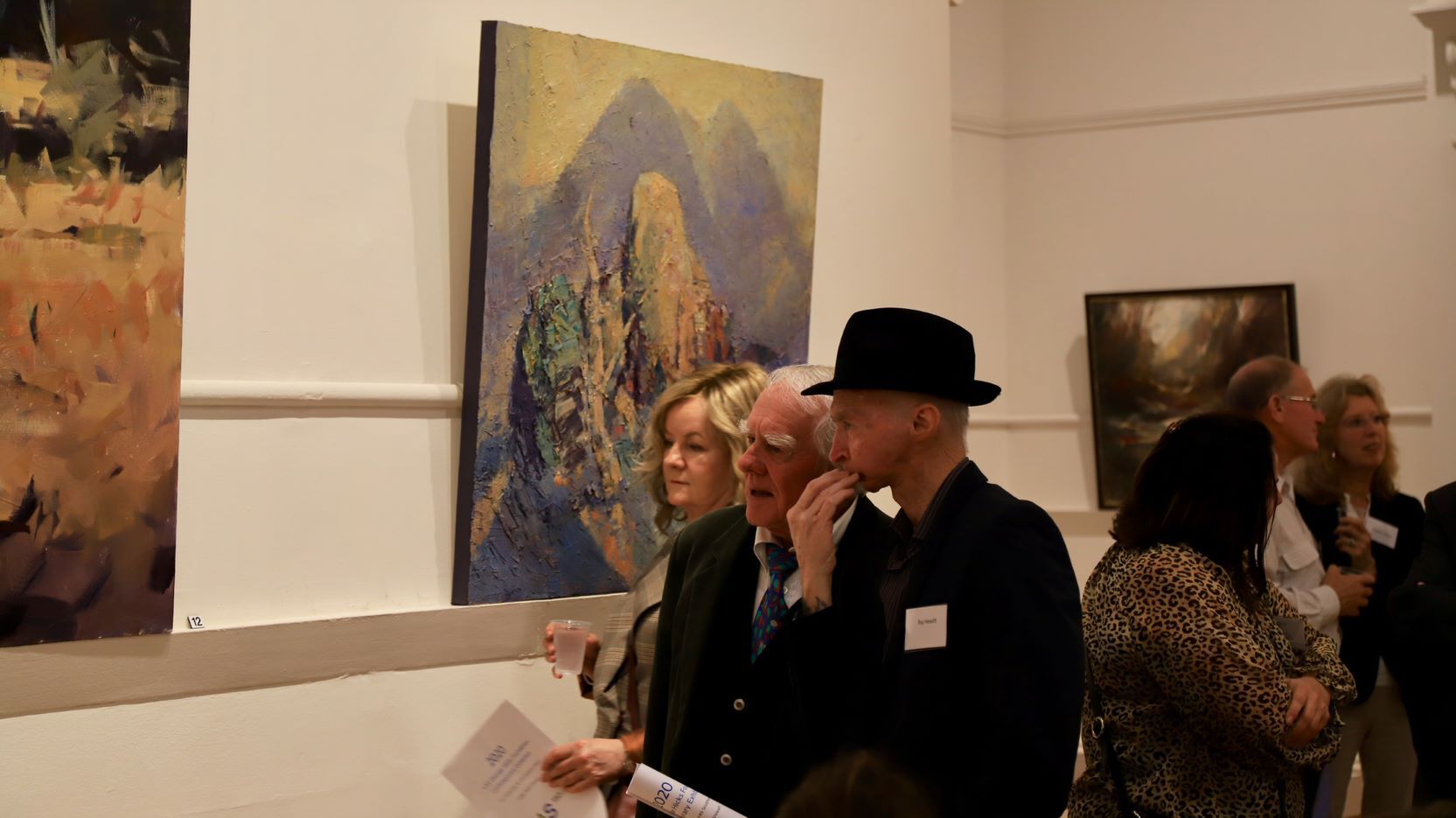 The merits of art works were debated, discussed and deconstructed.