View the video below of the Minister's visit and the latest vision of the restoration progress on YouTube.

Last Friday, The Victorian Minister for Planning, the Hon. Richard Wynne, was the guest of the historic Victorian Artists Society at 430 Albert Street, East Melbourne for an inspection of the final stages of a four year $2.5 million heritage restoration.

The completion of the heritage restoration will coincide with the 150th anniversary of the Victorian Artists Society in 2020.

“There is no other place in Australia where you can stand and be surrounded with the spirit and history of the beginnings of Australia’s Art.” 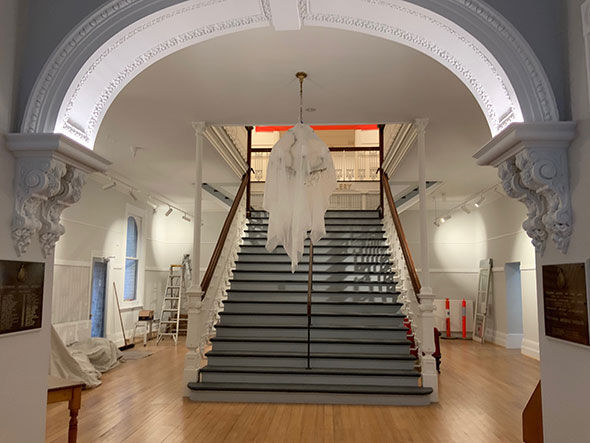 The restored staircase with the carpet removed to reveal the original slate steps and tessellated tiles on the landing.

The Victorian Artists Society had its beginnings in 1870 when a small group of artists and lay persons met in magistrate James Robertson’s house at Blessington Street, St. Kilda, to form the Victorian Academy of the Arts – the direct ancestor of the VAS. Among the founders were Louis Buvelot, J A Panton, Thomas Clark and Hubert de Castella.

This heavyweight group were instrumental in not only securing the Crown Land Grant on which our building now stands, but in the early establishment of the Society as a legal entity. Immediately following the grant of land in Albert Street in 1873, a small bluestone building was erected, which although almost totally subsumed by the present building, still serves both as a studio and a reminder of our colonial past.

Later in 1887 talks commenced to unite the two groups forming the Victorian Artists Society. It is within these walls that young artists including Arthur Streeton, Charles Conder, Tom Roberts, Walter Withers, Frederick McCubbin, and many others, commenced their journey of brushstrokes, which today form the foundation of Australia’s major art collections in national galleries across Australia.

This building is a public asset and learning centre for following generations, and is open to the public and all of those who love art.

The Victorian Artists Society's historic restoration of the building will ensure this historic birthplace of Australian art continues as an important part in the lives of significant and ordinary Australians, from the time it opened its doors in 1892 and well into the future.