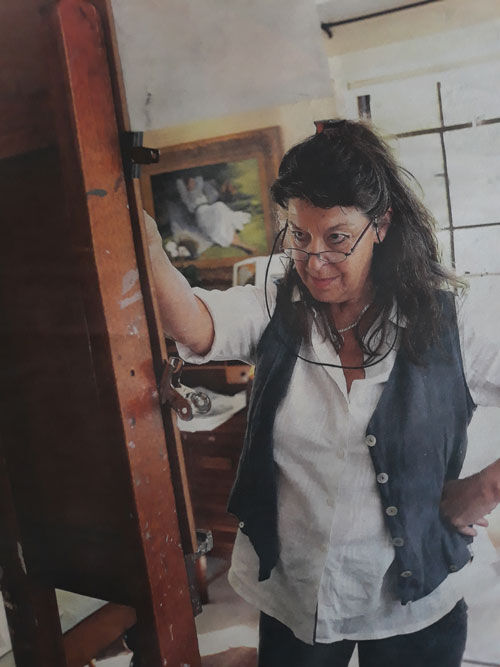 Deny has forged a career in art that encompasses a passionate and sincere aesthetic. She pursues harmony, technical excellence, and classical beauty in all its forms.

Raised in Sydney and Canberra in the quiet suburbs of 1960’s Australia, Deny spent her young adult life travelling and living in Europe and America for many years, painting on the streets of Paris and New Orleans, where she gained her lifelong love of portraiture. She then returned to Australia in the late 1970’s and spent the next thirty years building a family home and a career on the South Coast of New South Wales. Here she found the time and space to expand her practice in portraiture and gained much recognition for the skill and dedication she applied to classical technique, which at the time was not highly regarded in the mainstream art world.

A change of scene to Hobart in 2013 saw the establishment of the first iteration of the New School of Classical Painting, as Deny responded to the conversations she had about the shortcomings of training in classical and foundational techniques in fine arts training.

The New School of Classical Painting is the culmination of a lifetime spent observing, learning and striving for a kind of quiet eloquence rarely seen in the modern art world.

The School represents Deny’s heartfelt desire to share her hard-earned skills and pass on what she has learned to new artists from all walks of life. 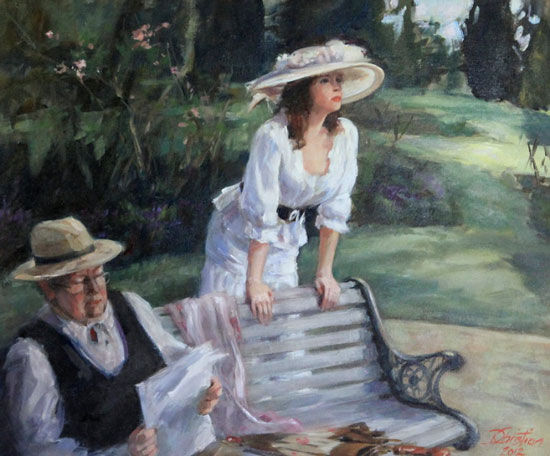 'A Difference of Opinion', oil by Deny Christian

Deny Christian was born in Sydney’s North shore in 1950 to a family who were, in retrospect, rather bewildered by this girl with a precocious ability to draw from her early years.

Post war Australia was for many families a cultural desert. We were influence by American television. Art was nowhere for most people—Galleries were unimportant and unvisited by many of us. So Deny began her own hunt for it—in books of the Masters’ works, mainly European. High school was a great learning curve with an excellent and talented Art teacher.

After gaining her Nursing degree Deny went touring and living in Europe and America for the next 3 years, absorbing and observing the treasures on each street corner, she also developed a deep love of Architecture and Archaeology. The latter while living in the Greek Isles, visiting Minoan and Classical sites, digs and museums. 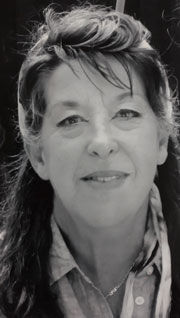 Life with an American husband took her to New Orleans, where pastels and paper were experimented with, working 8 hours a day on Jackson Square with street portraiture. A new career had begun, and Deny watched and learnt from the older artists.

Paris was next on her street portraiture plan, so she spent some time painting portraits in the Montmartre streets and drawing at the Louvre.

A return to Sydney was inevitable, and Deny set up an inner City studio and home from where she now worked in oils on portrait commissions from life and exhibited widely at various galleries She was twice hung in the Portia Geach Portrait Prize, and by 1999 her portrait of Garry McDonald had won the Packers Prize at the Archibald (Prize) Her Portrait of Dr Robyn Williams was exhibited at the NPG, and the Australian Museum.

Singer Sargent and Tom Roberts, Hugh Ramsay and Velasquez were her master teachers in the 1990’s. And by this time one could really find great quality in the prints of art books, whereby the close ups gave up their secrets of technique if one had the insight. And our AGNSW had and still has an exceptional 3 galleries of European Painting and Australian Impressionism. And there Deny often visited to study and sketch in the Gallery, including a one off comprehensive Retrospective exhibition of Hugh Ramsay which she found instructive.

In 1981 Deny bought a property on the NSW South coast, from where she continued and expanded her oeuvre of commissioned portraits over the next 30 years. Sitters were happy to travel to have their painting done from life. And Still life became important, with more freedom for personal expression. She held an annual show of classical Still life in the village Gallery and won the Inaugural David Berry Portrait prize.

Commissioned Portraiture is very controlling. Eventually it wears out its fascination. But Character portraiture—now that’s different, with the joy of full freedom of expressing the human condition.

The occasional foray into teaching at Berry brought into focus for Deny the broad range of painting knowledge she had acquired over 40 years of work. And how much aspiring painters wanted her insights as they could not find Classical teaching, Atelier teaching. There are very few such Schools in Australia.

A move to Hobart led to the creation of The New School of Classical Painting. A studio space was found in North Hobart, with 35 students, a huge challenge which led to finding a larger studio for the enthusiastic classes within 6 months. At the end of this 3 year sojourn Deny held an exquisite solo show of 12 still life works at Runnymede National Trust Mansion, and was commissioned by Tasmanian Parliament to paint the official Premier’s portrait of The Hon. Lara Giddings. MP.

Ms Christian now lives in Daylesford and continues to teach Atelier and exhibit. Her first exhibition with VAS is in the Cato Gallery and is in two parts. Character portraiture and Classic Still life works. 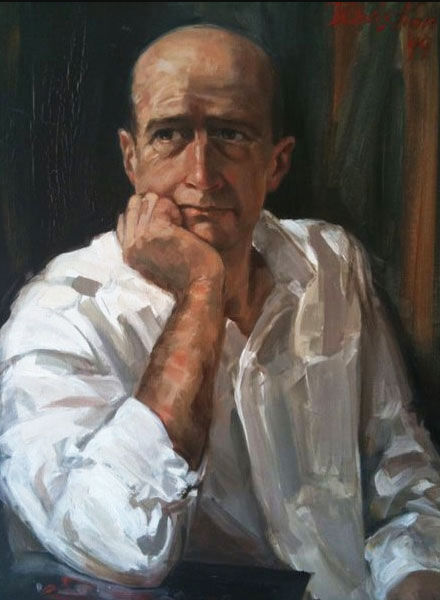 This Portrait won the 1999 Packing Room Prize for the Archibald 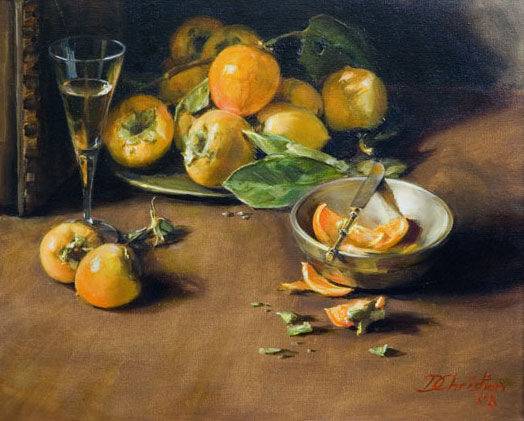 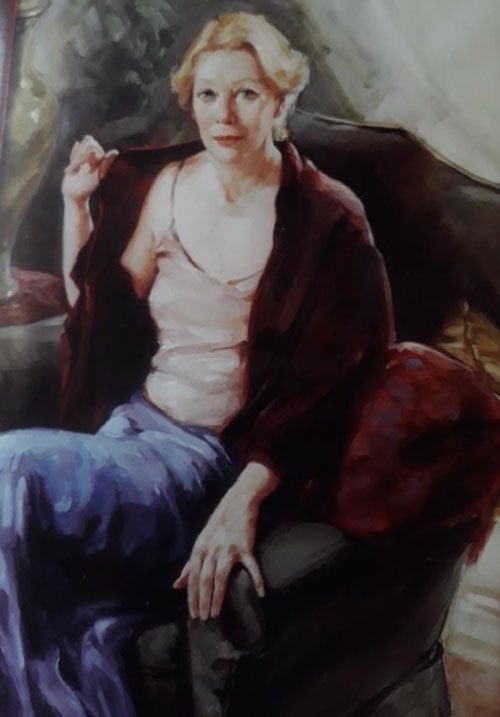 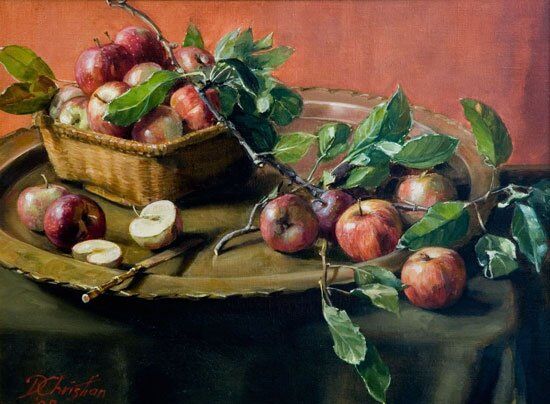 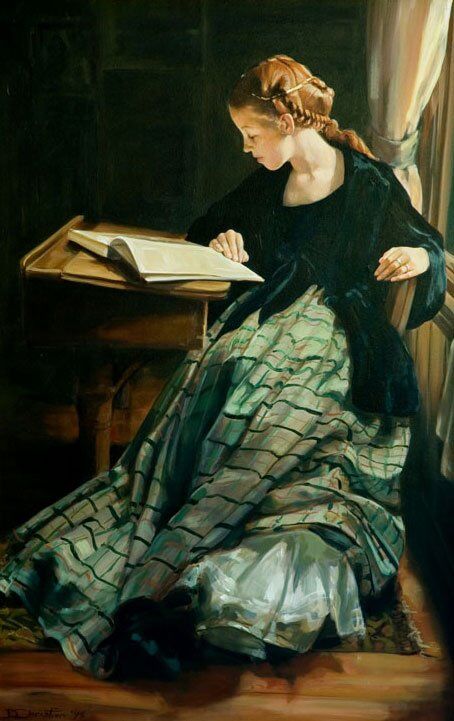 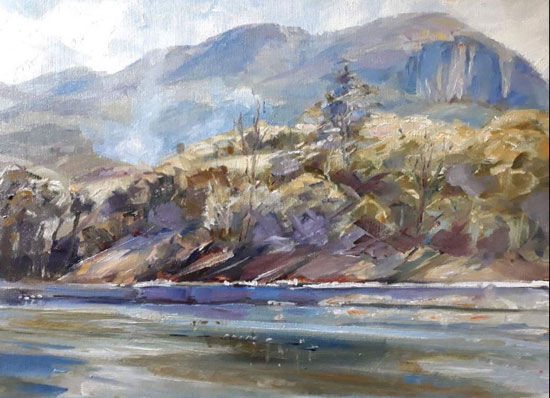 'Mt Wellington from the Reservoir', oil by Deny Christian 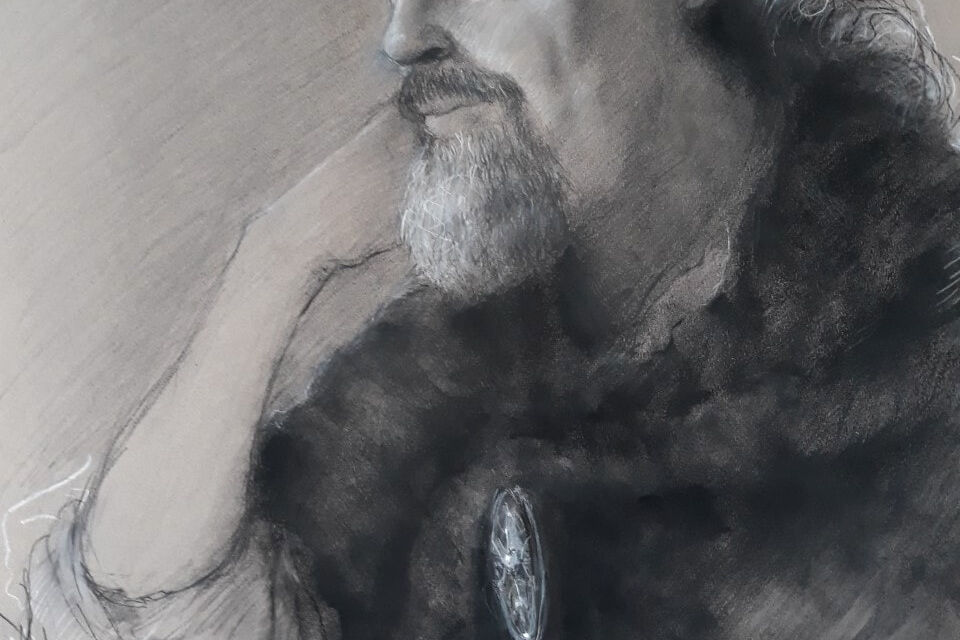 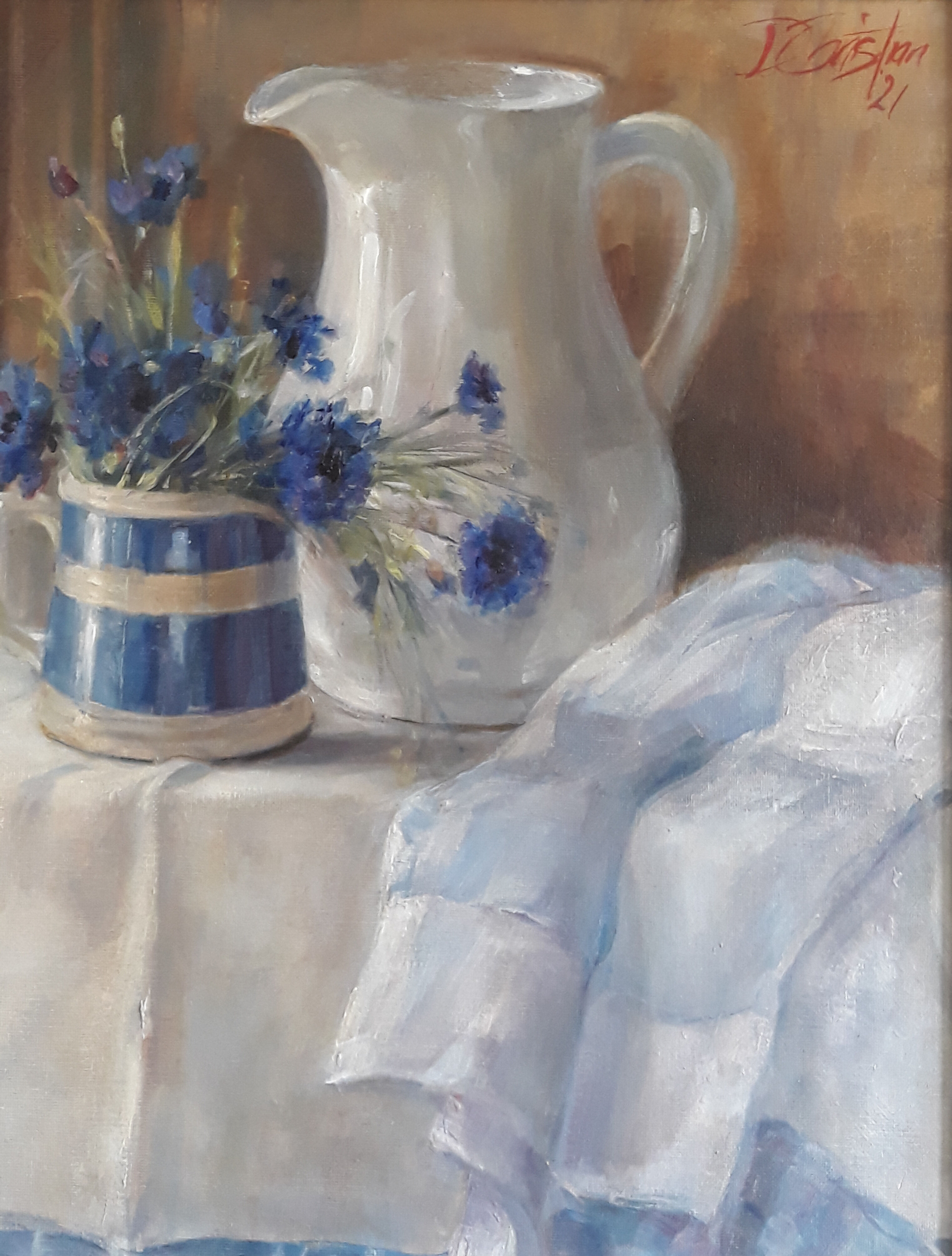 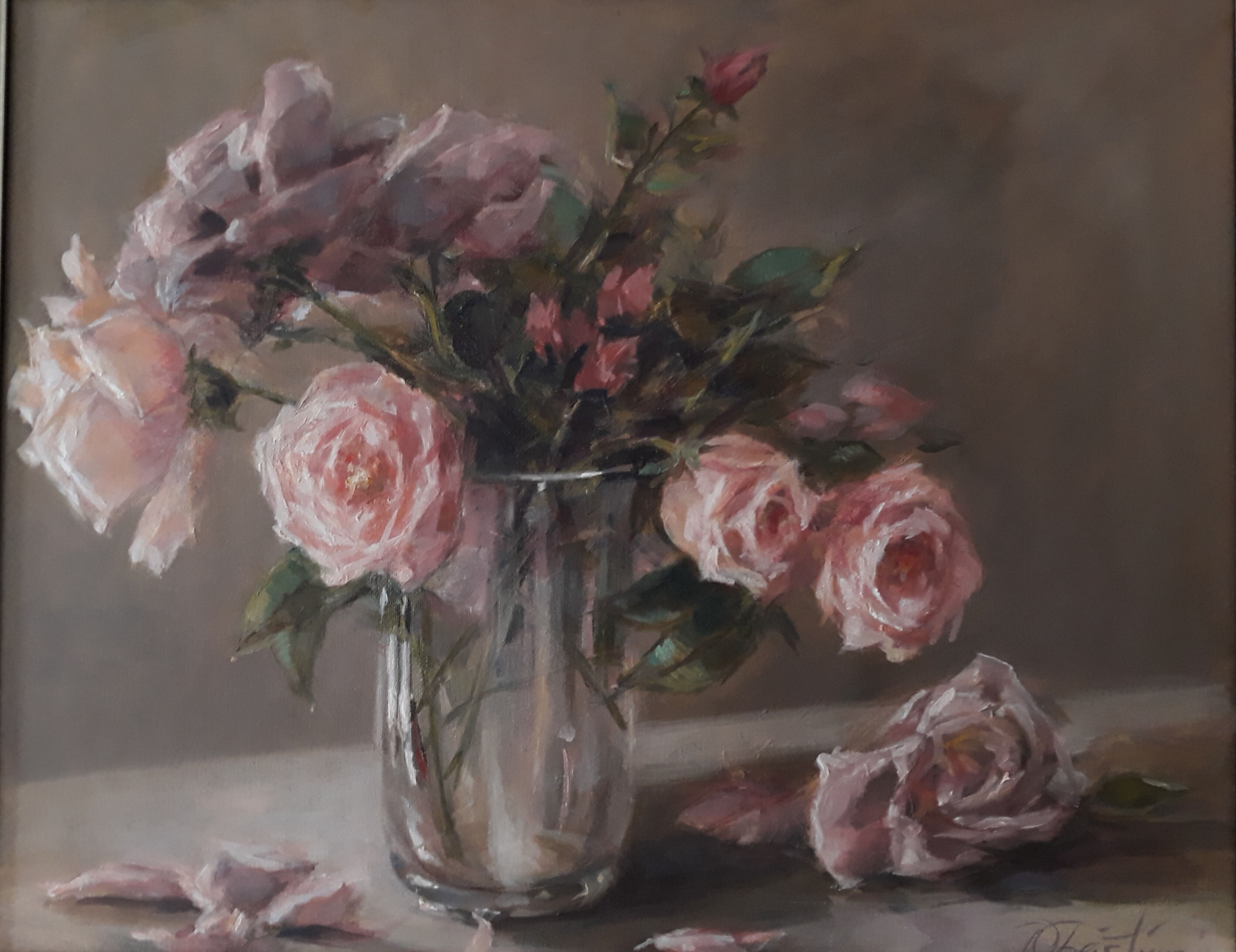 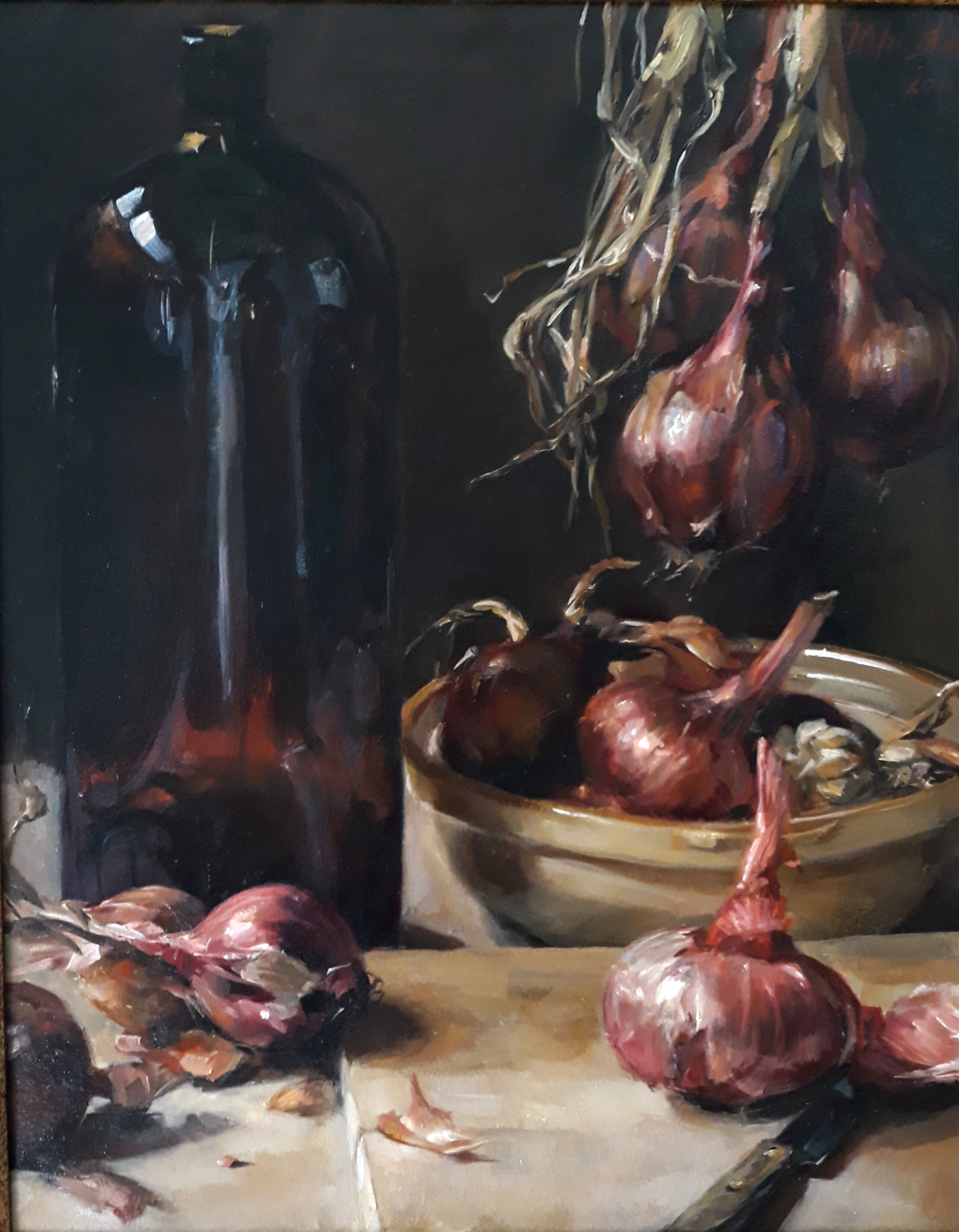 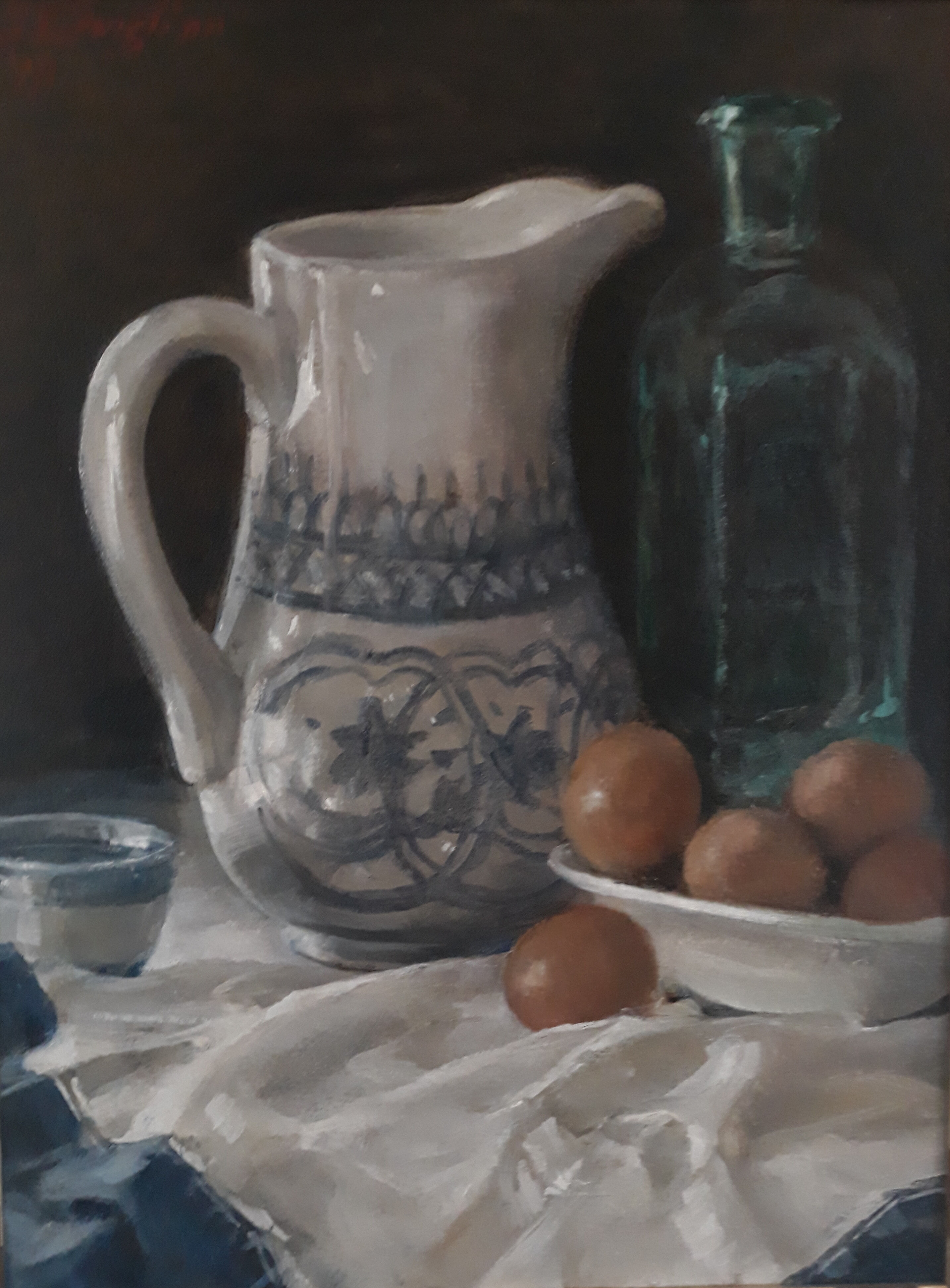 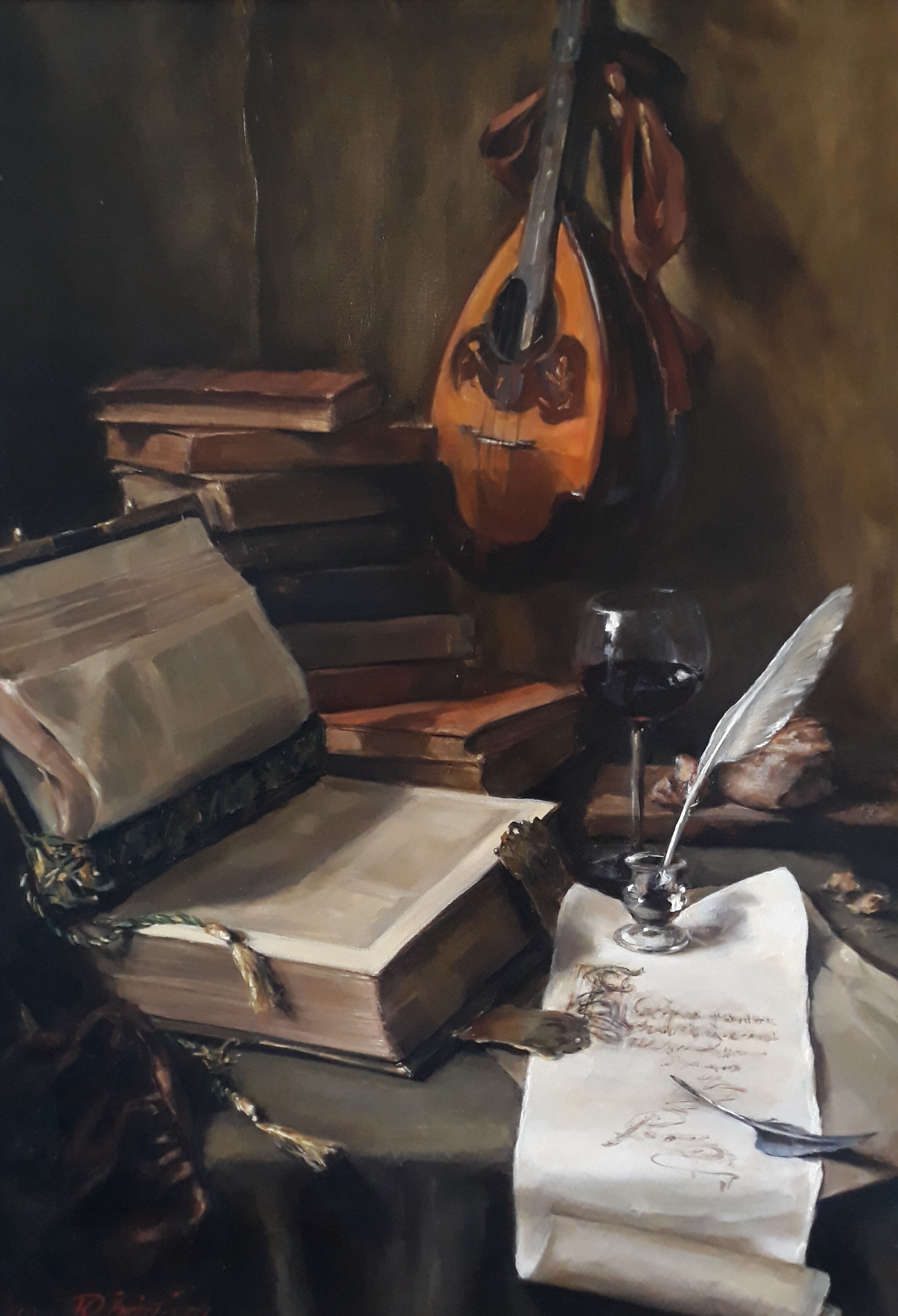